Innovative researchers develop artificial (marine) intelligence. Their results will change how you view a fish. 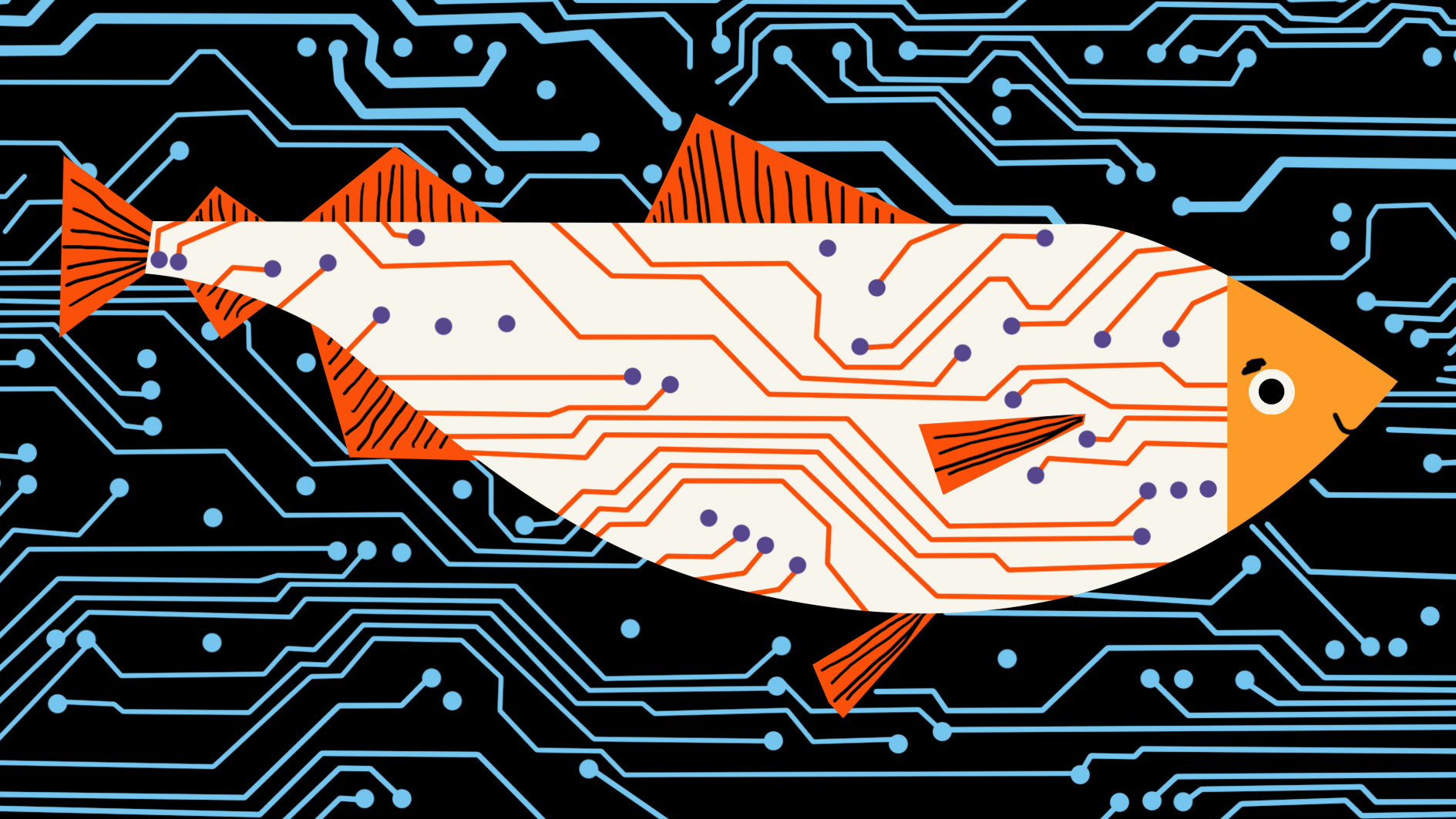 Filip Rotnes points to a gray square sprinkled with red, blue and yellow dots. Each dot is connected through a complex network of black lines. This, he explains, is the amino acid metabolism in the Atlantic salmon.

By mapping out all the metabolites and enzymatic reactions that govern amino acid flow in the fish, Rotnes aims to contribute to the computer model known as the Digital Salmon. He is not the only Norwegian researcher interested in digitizing marine life, and each project has its own ambitious goals.

The projects aim to change fish farming and feed production, and to provide critical environmental surveillance of the oceans. The computer models can even tell us what it means to be a fish.

At the Norwegian University of Life Sciences, Jon Olav Vik leads the Digital Life project DigiSal. He supervises Rotnes’ master project, and the two share both a passion for nature and an interest in using computers to solve big problems.

– We want to use digital tools to help us discover what happens to the carnivorous salmon when it has to eat plant material or other foreign feeds, says Vik.

The most pressing problem for salmon farming is that the industry is unable to produce enough fish feed to continue expanding the production and improve sustainability.

– We need to quickly evaluate new alternatives for fish feed. The current feeding regimes put large pressures on the farmed salmon, but the data generated from the experiments is far too large to keep track of manually, says Vik.

His aim is to develop the Digital Salmon as a virtual meeting place for scientists interested in how fish feeds affect the life and quality of the fish. Easy access to biological data, experimental results and mathematical predictions will contribute to better experiments and will allow targeted development of new feeding regimes.

The team at NMBU consists of researchers with complementary backgrounds, spanning from ecology to genetics and bioinformatics. Rotnes´ network for amino acid metabolism is a time-consuming, but a relatively small section of the future model.

– The first generation of the Digital Salmon was comparable to an average liver cell, says Vik.

In time, the model will grow to include organ specific models, with algorithms that range from a single cell to the whole organism. Similar approaches have successfully been used to model the human heart and the zebrafish, but still the work requires what Vik calls a “targeted simplification”.

– Our first objective is to model feed and nutrition in the salmon. It will also be possible to shift our perspective towards meat quality and fish health, but that will require expansions of the digital model that we do not have ready yet.

Life in the bioreactor

Salmon is an important source for beneficial marine fatty acids, obtained through fish oil in their feed. At SINTEF in Trondheim Inga Marie Aasen aims to tackle the problem with lack of fish oil in a different way. Aasen is a senior researcher in the AurOmega-project led by Per Bruheim at NTNU, and their goal is to train a single celled microorganism called thraustochytrid to produce fatty acids on demand.

–Our research aims to uncover how we can fine-tune the cells so that they transform more of what they eat into long-chain omega-3 fatty acids, says Aasen.

For a typical experiment she cultures large volumes of cells in specialized bioreactors over four to five days. After the initial growth phase, the cells start to produce fatty acids. Aasen collects samples at regular intervals, and keeps track of cell growth, substrate consumption and CO2-emission.

In addition to adjusting the technical parameters of the experiment, Aasen and her colleagues hope to be able to manipulate the metabolic processes inside each fatty acid-producing cell. To get a functional production line, Aasen and her colleagues still need to collect, analyse and interpret millions and millions of data points. The aim is to model the fatty acid synthesis to be able to use mathematical predictions to reduce the number of experiments.

– If we can simulate the first three experiments, we can then perform only the fourth and most valuable experiment in the lab, says Aasen.

A similar mindset also inspires the work led by Anders Goksøyr at the University of Bergen. The aim of his DLN-project dCod 1.0 is to understand how the fish responds to environmental stresses from contaminants in the water and climate change. They work to assemble a digital model of how the environment influences the fish.

– Our aim is to develop relevant knowledge and tools such as biosensors to help monitor the health of the oceans, says Goksøyr.

Wild-caught cod placed in contaminated waters or in aquaria form the basis of the experiments, in addition to cultured liver slices exposed to various contaminants in the lab. Both in the digital model and in the lab experiments, the researchers control temperature and salinity, and add the desired stressors to the cod.

– Cod and other marine animals living in Norwegian waters are repeatedly exposed to contaminants from urban run-off, factories, agriculture, aquaculture, petroleum activities, and other land-based and coastal industries, says Goksøyr.

It is not easy being a fish. Apparently, the same is true for digital fish.

A fish out of water

At least according to Jarl Giske and his colleagues in the AHA!-project at UiB. In their digital model of how biological creatures behave, the fish either survive to reproduce, or die and vanish into the ether.

The team consists mainly of evolutionary ecologists, researchers who have left outdoor experimentation behind‚ in favor of sophisticated models of animal behavior. Their approach is to put numbers to fish behavior and produce a simplified digital model of life as a fish. The model includes algorithms that control the central aspects of fish genetics, physiology and behavior along with its surrounding environment.

– The fish live in a digital environment where they avoid predators and find prey, and they also grow. Only those who survive and grow best produce offspring. And this is repeated generation by generation. This is how the population evolves, says colleague and researcher Sergey Budaev.

– The model is an extreme simplification of all the complexities of real life, and the genetic complexity of the fish is reduced to around fifty evolving genetic parameters in the model, adds Giske.

Their digital fish experiments have shown some surprising results.

– We observed that the fish developed different personality types. Some simply followed the group to areas with more food, whereas other fish were more willing to take risks and went out on their own. Gender differences in behavior also evolved, with more risk-taking in males, says Giske.

Modeling to understand behavior and evolution of fish may be useful in farming and fisheries, and can also tell us something about what it means to make a decision. In the future, Giske and Budaev plan to develop simple models of consciousness.

– We plan to model different kinds of brains to investigate how cognitive complexity is involved in evolution, says Giske.

The ambitious goal will increase the demand for computing power, but will also raise bigger questions about animals and consciousness. Although the models are simplified versions of reality, Budaev does not hesitate in his ambition to tackle the complexity.