Digital Life 2019 brought biotech researchers together for the third time

During two early September days, over 80 researchers gathered in Tromsø for the annual conference of the Centre for Digital Life Norway. 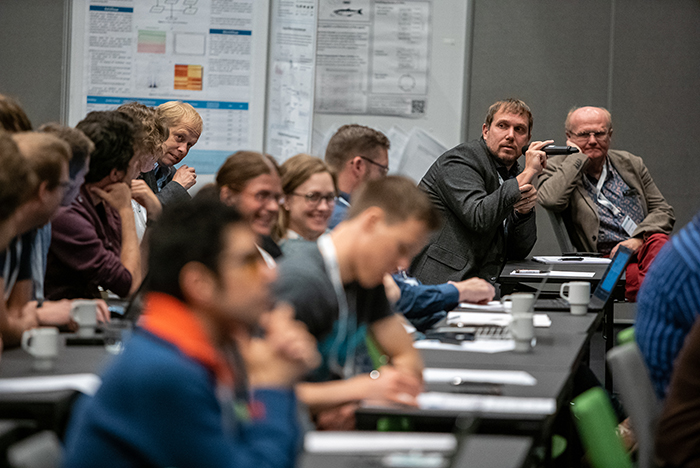 This year, the Centre had the honor to welcome Nikolai Astrup, Norway’s Minister of Digitalization, who opened the conference with a speech on digitization in the public sector and aspirations for sharing Norwegian health data.

The program further featured five invited keynote speakers from academic institutions in Norway, Sweden and Germany. They presented on the cutting edge in antimicrobial research, research-based innovation in biotechnology, value creation and the public good in research, digital twins in health research, ambitions to sequence the genomes of all eukaryotic life on earth, and the use of systems biology approaches for personalized medicine.

The conference’s strongest attraction was the rich and diverse portfolio of research conducted in the Centre. The nearly 50 posters and four plenary presentations sparked many engaged discussions and helped establish new connections. We congratulate Tone Kristoffersen from UiT for winning this year’s audience award for best poster. Tone is a PhD candidate in the DLN project DigiBiotics and received the 5000 NOK prize for her poster titled: “Synthesis of membrane targeting compounds - a promising target for new antibiotics”.

The organizing committee would like to thank the invited speakers for inspiring the members of the Centre with new insights. They would also like to give special thanks to all the participants for making this annual conference a constructive site for networking and exchanging of ideas, methods, knowledge.

Below is a visual summary of the two days in Tromsø, all photos by Buendia-photography/David Gonzalez. 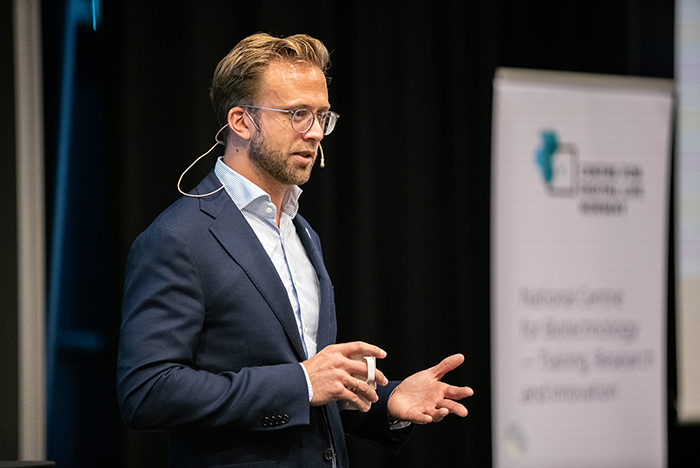 The Minister spoke about Norway’s accomplishments and aspirations regarding digitization in the public sector. He further argued that government should facilitate third party access to the country’s unique collection of health data. The minister stressed that digitalization is mostly about culture, not technology, and the quest to improve peoples’ lives. 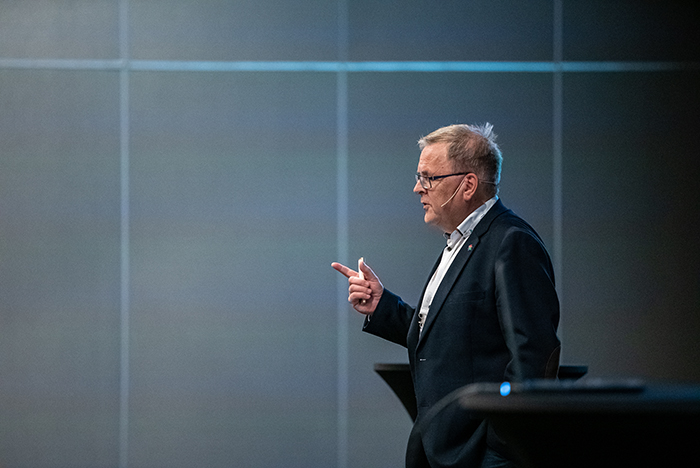 In the opening keynote, professor of chemistry Jon Sigurd led the audience through different aspects of what is now deemed a crisis of antimicrobial resistance, before presenting his group’s approach to antimicrobial drug development that focuses on membrane disrupting properties of a class of middle-sized molecules. While it is hoped that this mechanism might slow down the coevolution of resistant microbes, John Sigurd suggested that we should also investigate alternative approaches, such as managing the spread of microbes in a host organism, rather than focusing on their destruction alone, by taking cues from cancer research. 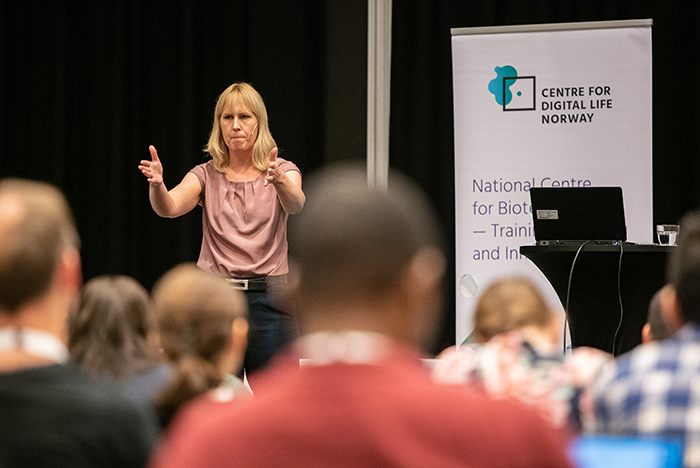 Swedish Jennie Ekbeck shared insights from her prize-winning work at the Umeå Biotech Incubator. The incubator managed to drastically increase the share of innovations owned by women, a feat realized by offering a new interpretation of an established observation: women tend to pitch innovation ideas only when they are convinced of their robustness, whereas there are more speculative pitches by men. This leads to fewer proposals by women than men. But rather than encouraging women to be more speculative, the incubator pays more attention to robustness, leading to an increased number of innovation ideas by women. Ekbeck’s main message, however, was that knowing the prospective future user and their needs is key to any innovation, a fact that the technology focused mindset of many researchers tends to underappreciate. 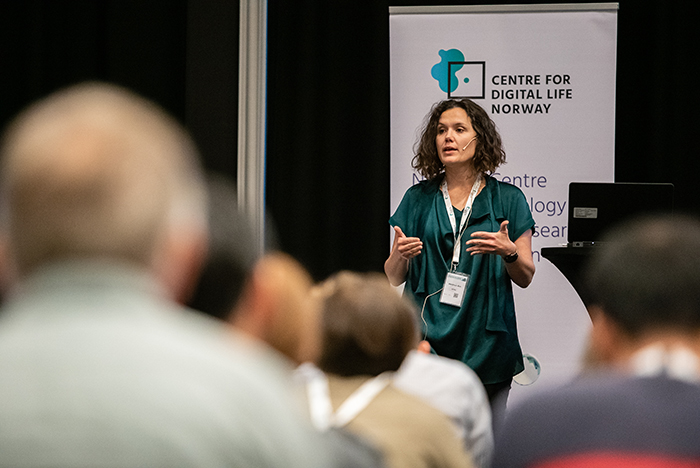 In her talk, former RRI workgroup leader Heidrun Åm argued that when we try to define the value of research (e.g. impact on whom, for whose benefit), we cannot do so without simultaneously considering the fact that there are different conceptions within the scientific community of what is a worthwhile pursuit of science, i.e. the values in science. She then proceeded to map the diversity of values within the Digital Life activity portfolio as a way to point to coherences as well as inevitable trade-offs, leaving us with the message that if there is a conception of the common good that we want to uphold as the most legitimate one, then we need to position us clearly against the drawbacks of other conceptions. 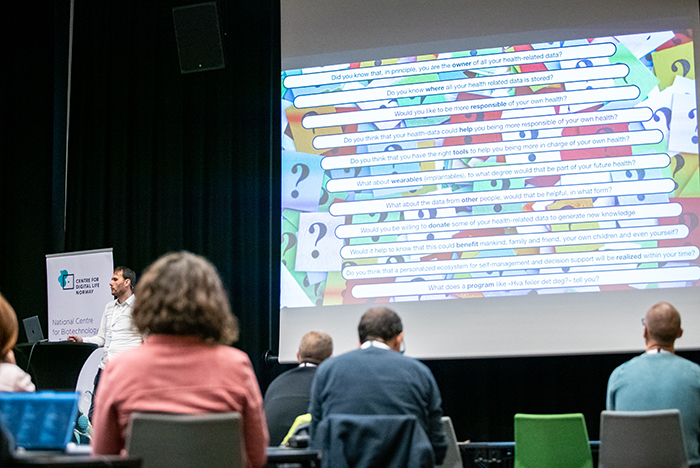 Frank Lindseth hails from the Department of Computer and Information Science at NTNU, and SINTEF Medical Technology where he investigates the internet of things, big data and artificial intelligence. In his presentation he introduced the digital twin concept: a digital model of a physical object that receives continuous input from sensors attached to the object. This idea is applied to buildings, machines and now also to humans. Lindseth presented research in the domain of health technologies. 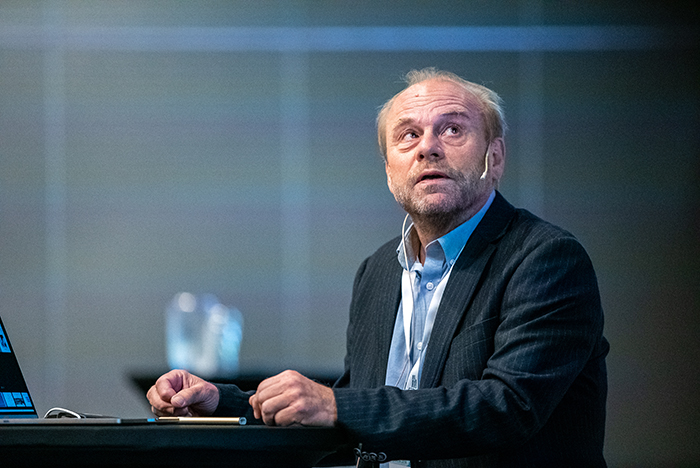 After a crash course in the state of the art of genome sequencing approaches, UiO biology-professor Kjetill Jacobsen introduced the Earth Bio Genome Project, dubbed the largest ever biology project, that aims to sequence all eukaryotic life forms on our planet. Jacobsen argued that Norway ought to take a leading role in the project, as he envisions economic and ecosystem conservation benefits from such an undertaking. 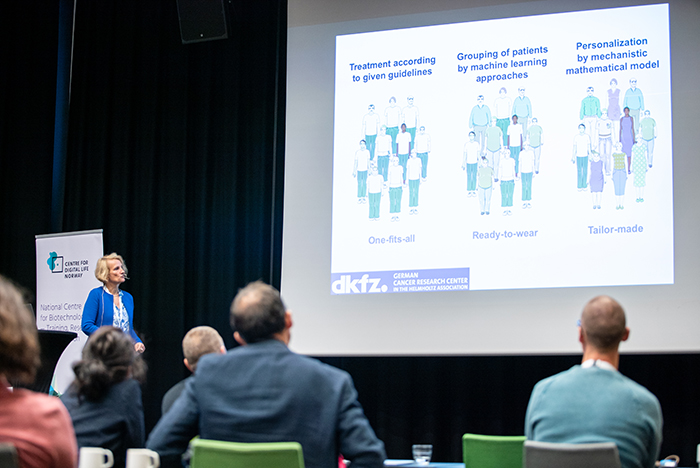 Diving into one of the core areas of DLN, Ursula Klingmüller presented research on personalized medicine in the treatment of Acute Myeloid

Leukemia that is being done by a large, interdisciplinary team. The talk traced the research path from the experimental investigation of the Eporeceptor, the modeling of signaling dynamics, to the eventual development of a model that yielded clinically actionable predictions using patient-specific parameters. Klingmüller ended the presentation with a refreshing complication of the ethical landscape of personalized medicine, notably the fact that there are different groups of stakeholders, who each have their own interests and face dilemmas specific to their own situation. 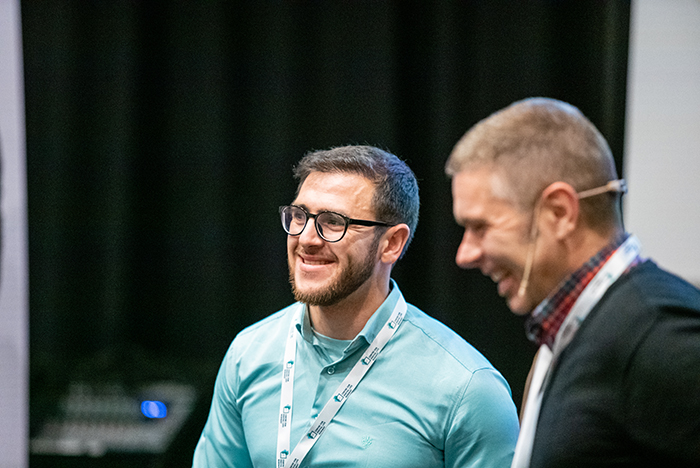 Mohammed Suoqrot (NTNU, the PROVIZ project) presented on the development of a quality control system for a machine-learning MR imaging solution. 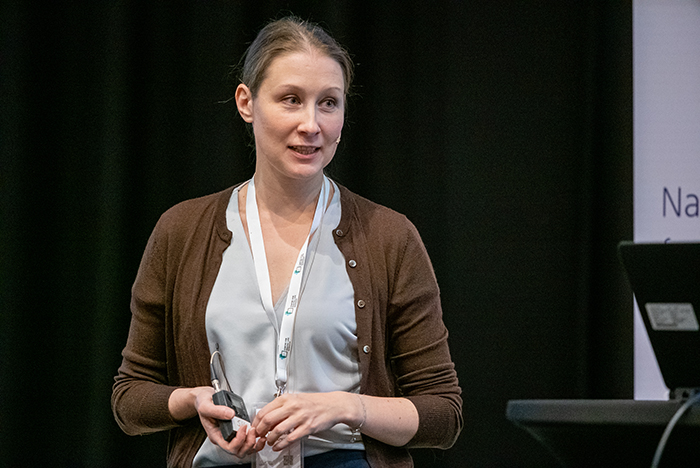 Daria Zaytseva-Zotova (NTNU, the 3DLife project) showcased work on alginate hydrogels tailored for the cultivation of fibroblasts in 3D. 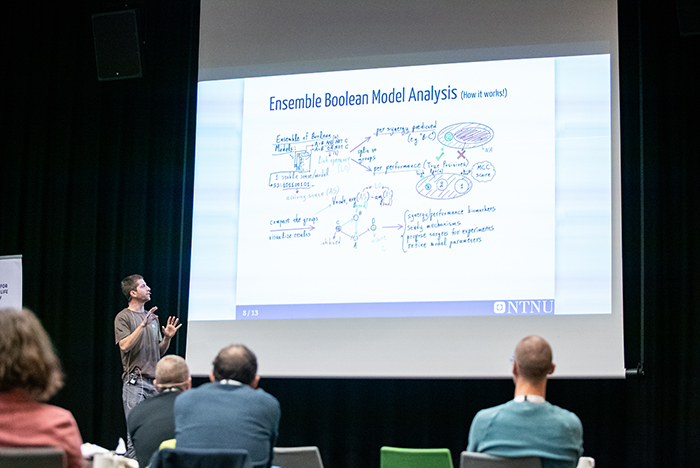 John Zobolas (NTNU) engaged the audience in how the DrugLogics project makes use of logical modeling in personalized medicine. 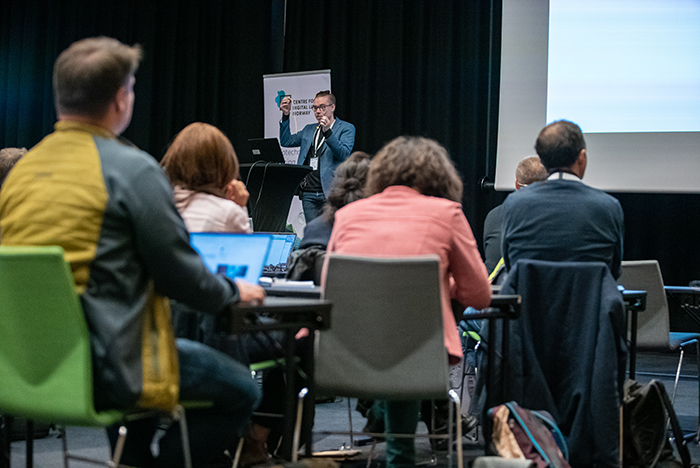 Finally, Eskil Andre Karlsen (UiT and the DigiBiotics project) explained his screening of peptides to develop an antimicrobial biofilm for catheter surfaces. 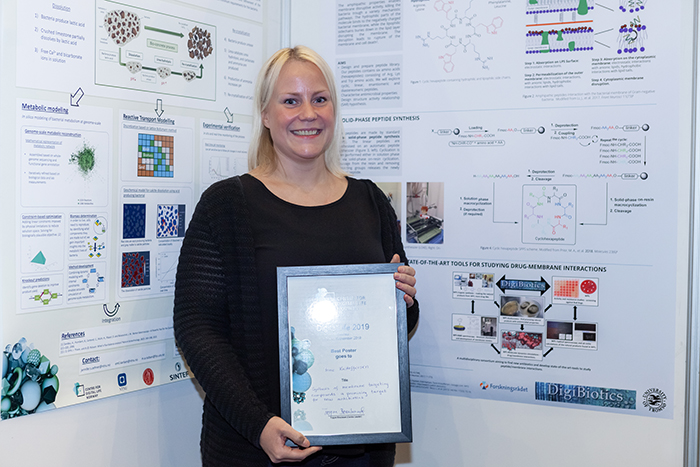 Tone Kristoffersen (UiT), the winner of the prize for the best poster. 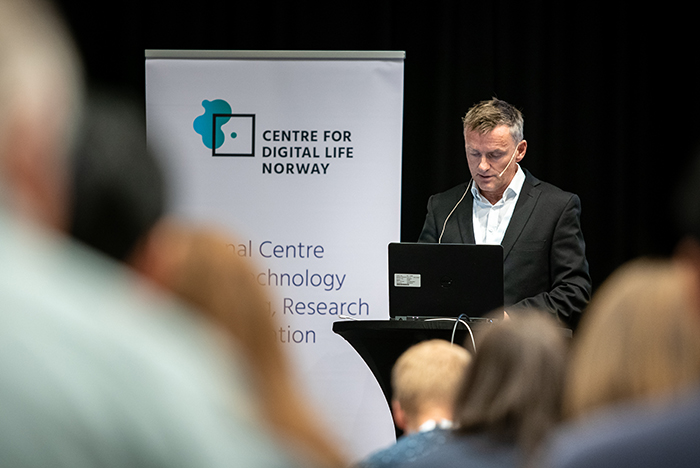 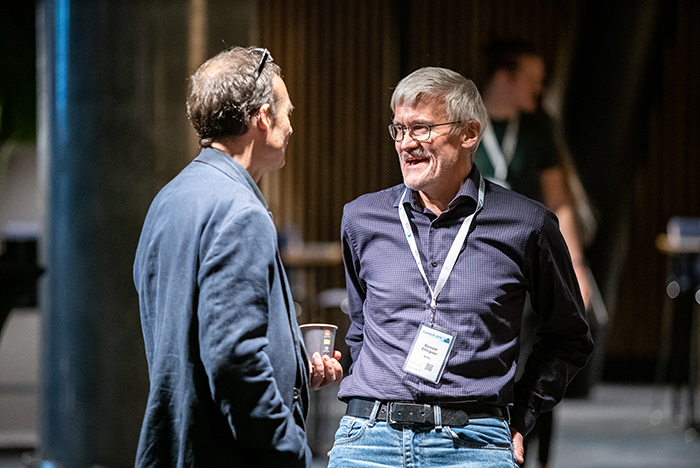 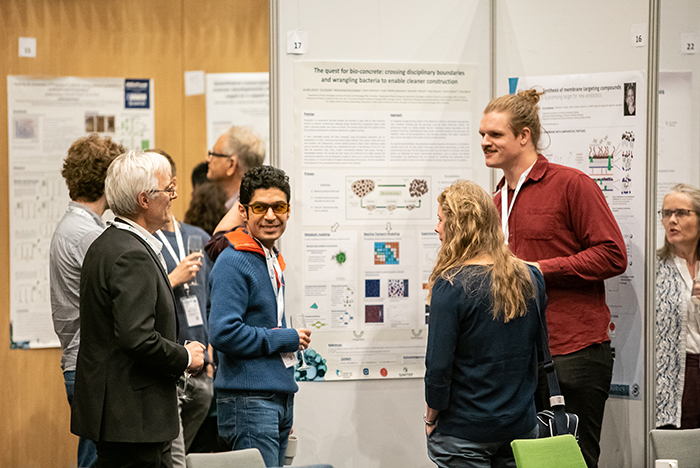 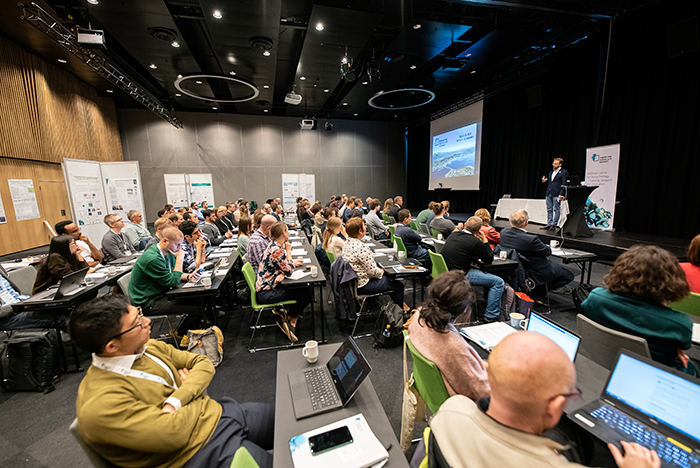 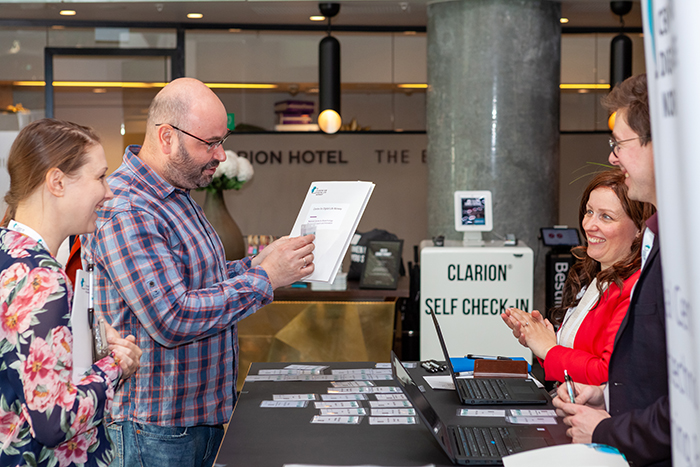 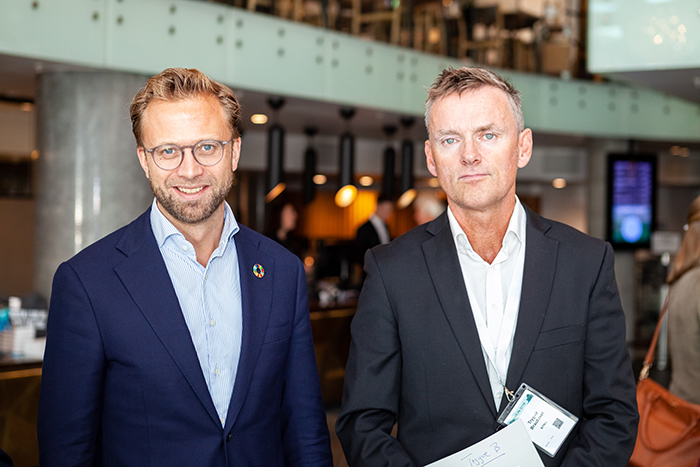 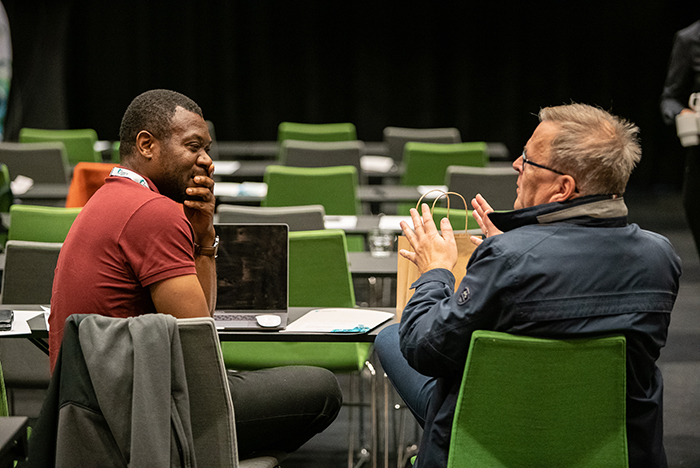