Blog based on the cross project collaboration of the NANOP/BEDPAN and BioZEment projects. 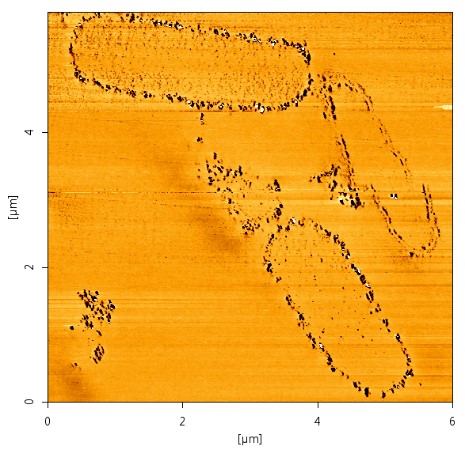 Magnetic field is invisible. While there are certain magneto-optical techniques allowing seeing it on macroscopic scale, they are not applicable on the nanometre scale due to the diffraction limit of light. Seeing magnetism on nanoscale is extremely important for many materials, including palladium (Pd), which is ferromagnetic on nanometre scale, but loses magnetism when grown above 5-10 nm.

Palladium is now most expensive metal due to its wide use is car’s exhaust gas convertors, fuel cells, organic catalysis and even cancer treatment. Following Nobel Prize in Chemistry in 2010, it is a king of catalysis, but is very rare, as its most stable isotope has half-decay period of just 6.5 million years.  Recovering palladium is difficult. The modern approach to it is to let allow bacteria do it, which can multiply with high speed and accumulate Pd on their surface, as well as inside their bodies. The special types of non-pathogenic bacteria are designed at University of Oslo to do this work efficiently.

The magnetism of palladium nanoparticles adds additional excitement. It is believed that magnetism is intrinsically linked to catalytic activity of Pd and that, being isolated in small clusters, it can be used in a controllable way in electronic applications and quantum computing.  But is it possible to see magnetism of Pd nanoparticles?

The scientists at University of Oslo for the first time achieved this by using now becoming common technique of Magnetic Force Microscopy (MFM). While this technique is successful for inorganic solid materials on nanometre scale, its use for biological study is rare. Additionally to this, visualising magnetism is very delicate issue. Just scanning surface with magnetic tip with nanometre accuracy is not sufficient, since additionally to magnetic force, there is Van-der Waals force, which is acting on tip when it is too close to the surface.

To achieve magnetic mapping, ‘artificial fossils’ were prepared by imbedding bacteria with Pd nanoparticles into resin and cutting thin slices (about one micrometre) that are set on nanometre-smooth glass. By using advanced MFM instrument allowing resolution down to atomic scale and exploring different distances from the surface, a particular regime was found, in which short-range Van-der Waals force already not influences tip, but longer-range magnetic force is still sufficiently strong.