Science meets art – not so long ago this was the standard lived by the scientific community. When Leonardo da Vinci lived, there was no question that art and science could not exist without each other, that in fact one inspires the another. However, in the scientific revolution we have gone through in the past century, a cleft has opened where the two subjects have lost track of each other. We get to feel that in particular nowadays when scientists struggle to explain the science they are conducting, and also struggle visualizing their research well. 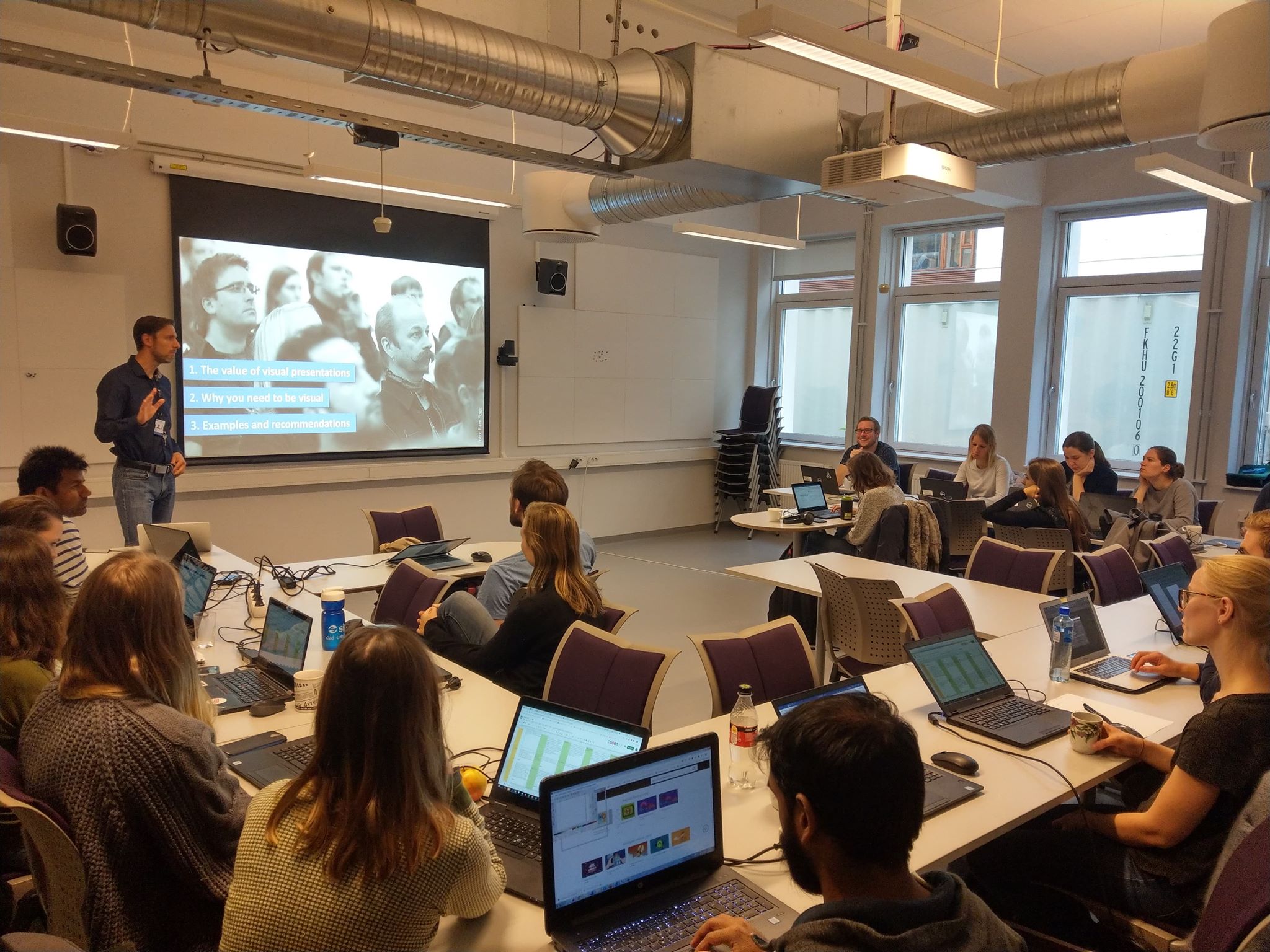 The importance on public dissemination is stressed during the scientific education. To be of value to the public, we need to be able to let our research peers and the public know what we are doing and what we have found out. To meet those needs, we learn to some extent how to use power point to present our findings and how to manage stage anxiety and how to become a better speaker. One of the things we constantly hear is “And then you just put your figures in the presentation and (..)”. However, no one explains or teaches us how to actually “just” make those great figures that show our project outline, that show how we get from A to B in a process, or that show our results and analysis so well that the figure is self‑explanatory and easy to understand. When other natural scientists try to say something about creating figures, they usually end up saying “So this is what works for me (..)”, with no indication as to why this works. Which makes it hard for others to apply the same principles to their own figures.

I have found myself in many situations where I am stuck in the struggle between wanting to make a scientifically accurate figure and wanting to make a figure that is easy to understand. Usually, I end up with something very confusing. The nice part about this – or maybe the part – is that I am not alone. After many long night discussions about this very frustrating subject with Christian Schulz, a fellow PhD candidate at the Department of Biotechnology and Food Science at NTNU, we decided something had to be done about this. We were not able to find any crash course that we could take that explained “how to make good illustrations for natural scientists”. So, instead we set out to organize our own course with experts teaching how to do create scientific illustrations. And those experts were to be designers.

We got double lucky. First of all, we managed to secure a grant from Digital Life Norway Research School to organize exactly such a course. 4-day intensive, hands-on, getting a lot of feedback from designers. Secondly, we managed to get the head of the design department, Ole Andreas Alsos to be excited about this project.

Fast forward to a week in September 2019: A group of 21 PhD candidates and one post-doc sit expectantly in a room at Gløshaugen, NTNU. The next days they will hear from different designers who work at NTNU's design department about good rules for using colours, arrows, hierarchy, how to draw attention to the most important part of your illustration, how to use Adobe Illustrator, how to break down your own research into the essentials and many more things. In addition to that, participants get a lot of hands-on time and direct feedback to the things they are working on while the designers go around and dive into deep discussions with different people. The course was very intensive, but also very productive. I personally really enjoyed the part where I needed to explain to the designers what my research is about, because the designers did not want to give only superficial feedback. They really tried to understand what people were working on to give extremely specific feedback to an illustration or figure. This helped people to break down the different parts of their research and also make them realize which part is actually important and what is just some “noise”. I also learned a lot from a drawing-by-hand session that was held at the beginning of the week. It was a surprise to me that designers would begin all their work sketching out things on paper by hand. I had always imagined they would start out at the computer and that is exactly how I used to start any work on a figure. Now I have learned for the better, how designers would start their process and it has helped me to improve my process too. Overall the atmosphere was very positive, and the participants were usually involved in discussions, asking each other for feedback and getting a lot out of these interactions.

Christian and I got the impression that not only we, but also the other participants enjoyed the course and found it useful. Our follow-up questionnaire confirmed this feeling. All of the answers indicated 4 or 5 points out of 5 possible on the question “How useful was this course for you overall”. This is a great feedback and we as the course organizers are extremely happy about this. It builds a good basis for other courses such as this. So, if you are one of the people who missed out on the course (50 sign ups but only 20 spots), or you got interested now – there will be another alliteration of this course in 2020. Stay tuned and check out the Digital Life Norway Research School website or newsletter!

Our special thanks go out to Lucy Chamberlin, who did a massive job coordinating the designers. Moreover, all the designers who were part of this, held lectures and gave feedback: You were absolutely amazing and managed to give some design-inexperienced folks valuable lessons and feedback. Thanks to all the participants as well, the good atmosphere we had throughout the course was only possible due to your engagement.

On a special note: PhD candidates – get out there, dare it, apply for a course grant! We had gotten the feedback from Digital Life Norway Research School that they were very surprised that two PhD students would apply for a course grant. Especially when we would only organize the course and not actually hold the lectures ourselves. One could say we ended up being the guinea pig as part of an experiment how this would turn out. I might be biased, but I would say it did turn out well. So, chances are, that of you apply now to do a similar thing, that you will be met with less resistance. Good luck!