The genetic basis for adaptive evolution

All living creatures have a distinct appearance resulting from expression of its inherited genes, giving rise to variation in traits; such as size, body structure, length, and coat color. As variations arise in a population, there will be selection. Using today’s sequencing technology, the relationship between appearance, variation in the genome and selection can be revealed.

Professor Leif Andersson has devoted his research to investigate the connection and interplay between the genome, its regulation, and the occurring phenotype. In the Volterra Lecture given 5 April 2017 at UiO he gave examples from natural populations of ruff (Philomachus pugnax) and Atlantic herring (Clupea harengus) where whole genome sequencing has given novel insight into the relationship between genetic and phenotypic variation. 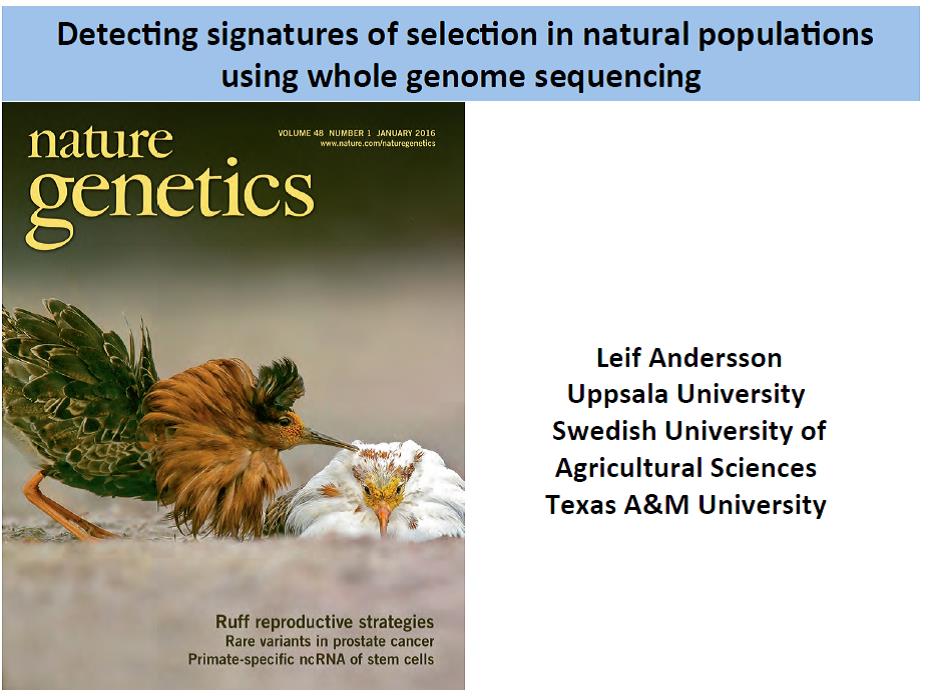 Slides from the lecture

The possibility to assemble any genome and resequence multiple individuals from the same species has radically changed the field of evolutionary biology. In this presentation I will present how we have used whole genome sequencing to resolve two enigmas that have been under debate for decades. One concerns how it is possible that the three male morphs in the ruff with strikingly different mating strategies, plumage and body size can be inherited as a simple monogenic trait. The other concerns the Atlantic herring (Clupea harengus), which is one of the most abundant vertebrates on earth and constitutes a huge biomass in the North Atlantic. Earlier studies based on a limited number of genetic markers (isozymes and microsatellites) had hardly revealed any genetic differentiation at all between populations living in strikingly different environments, such as the Atlantic Ocean and the brackish Baltic Sea, or spawning on different times of the year (early spring to late fall). How is this possible? Whole genome sequencing of multiple populations has now revealed that the FST distribution in this species deviates significantly from the one expected under selective neutrality with the great majority of loci showing no genetic differentiation while a small percentage show highly significant differentiation. This makes this species an ideal model organism for detecting signatures of natural selection. These studies revealed a new enigma namely that the Atlantic herring has only a moderate nucleotide diversity (π=0.3%), “only” three-fold higher than humans, despite a huge census population size. The possible explanation for this enigma will be discussed.

E-mail this page
>
The genetic basis for adaptive evolution